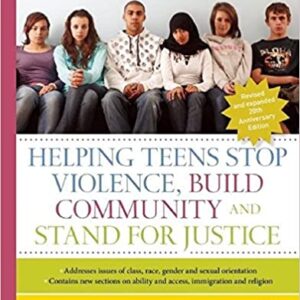 The following excerpt comes from the twentieth-anniversary edition of what was originally titled Helping Teens Stop Violence. Our first book presented our work with young people in classes and support groups, addressing violence in families and relationships, particularly as it expressed larger societal and institutional oppressions based on gender, race, sexual orientation, economic background, and age. Since that first publication we have published curricula and books that expand and apply the ideas of Helping Teens Stop Violence to more detailed work with youth in middle and high schools as well as to in-depth examinations of several forms of oppression directly.

But beyond the original setting for Helping Teens Stop Violence, how does violence fit into young people’s lives, twenty years later? We have taken the occasion of rewriting the original work in order to look at what young people are facing now in the United States at the end of the first decade of the twenty-first century.

At the same time, whole populations of young people are labeled as problems needing to be fixed: immature, irresponsible, dangerous threats to the safety and stability of our society who need to be monitored, controlled, isolated, and punished. Despite the significant decline of youth violence over the years, young people continue to be accused of being the main perpetrators of violence when, in fact, adults are much more violent than young people and young people are much more likely to experience violence at the hands of adults than from each other.

Young people do bear some responsibility for the choices they make—and they pay dearly for the consequences of bad choices. But most make smart choices, and the dangers attributed to their decisions are often greatly exaggerated. It is the assumption of our work that young people are not the problem —they are part of the solution. Adults are responsible for creating the conditions in which young people make choices and are also responsible for public policy that either provides or denies youth safety, support, information, and youth-defined ways to become involved in the community. Youth are not only our future but our present, and we will not solve any pressing social problems without their active, creative participation and leadership.

Whether you are a teacher, youth worker, parent, community educator, or activist, you have most likely been granted access to young people in an institution that itself reflects and may perpetuate certain forms of injustice. You may be charged with focusing on a particular area of youth behavior that adults have identified —or diagnosed—as a problem. Some of the most commonly identified problems include drug abuse, gangs, bullying, family violence, teen-dating violence and sexual assault, sexuality, media impact on youth, and the umbrella term “youth violence.” Any of these issues can serve as a lens to facilitate social-justice education. But if the focus is on fixing young people and returning them, thus fixed, to institutional environments that are oppressive to them without giving them the information and skills they need to work together to address that oppression, then the work would be better labeled “youth management” than “social justice.”

Our country currently (in 2011) faces major social, political, economic, and cultural challenges. We are at war in several countries in the Middle East and live in an increasingly militarized society. We have military bases around the world and produce and sell as much military equipment and arms as the entire rest of the world combined. The use of force is extolled by our highest political leaders, condoned in our families, and glamorized in the media. We face a widespread financial depression in which millions have lost their jobs, their homes, and their life savings. Mounting environmental destruction, global warming, and an increasingly toxic environment present daily threats to our health and well-being, including the air we breathe, the food we eat, and the water we drink.

In this environment, how do we prepare young people not just to stay safe and out of trouble but also to become active family and community members, critically thinking citizens who can participate in solving our collective problems and shaping our collective future? How are young people turned into adults who accept hierarchy, exploitation, and the larger-scale violence in our society? The Twentieth Anniversary Edition of Helping Teens explores this process that we call adultism, which is the daily systematic and institutionalized oppression that young people face at the hands of adults. Educating adults and young people about adultism helps them understand this process. At the same time, an introduction to adultism gives people a sense of our common ground in taking responsibility for fighting oppression and building community.

As the result of years of research, we now know that training in adultism and the other “isms” starts between ages two and five.  At these early ages, children are already internalizing lies and misinformation about themselves and each other; about such differences as skin color, gender, language, national origin, and class; and about the workings of hierarchies based on these differences. During these preschool years, they are already constructing identities and acting out interpersonal relationships based on feelings of superiority, entitlement, vulnerability, and defense of their personal integrity. In our decades of experience as educators and activists, we have found that before people are able to look at the systems of oppression that divide us, such as racism and sexism, they must understand the common conditioning we all endure and the common ground we share.

Part of our common ground is the violence that adultism itself causes. This violence includes internalizing the messages of adultism and looking to harm the less powerful or directing the pain inward and hurting ourselves. This tendency to pass on abuse is also part of our common ground. Most of us were not only the bullied but also the bully, not only the teased but the teaser, not only the one who was put down but the one who put down others. At the same time, we share common concerns, needs, loving natures, and an unstoppable pursuit of connection, inclusion, and participation in safe and healthy communities. Our need and desire for community is the basis for common ground upon which we can build in our work for social justice.

We have found two questions useful in doing this work. The first is a question that we often ask ourselves and the young people in our lives: “What do you stand for?” It is a question about values. “Are you a person worthy of respect?” “Are you trustworthy?” “Do you live with integrity?” “What kind of moral values do you act out in your everyday life?” This question is important; it is one we need to continue to ask ourselves and each other to keep us true to the ideals that we hold.

Another question that we ask less often is equally important. “Who do you stand with?” “Do you stand with those who are being abused, excluded, bullied, harassed, and exploited?” We can stand for many wonderful values, but unless we stand with others, those we know and those we don’t, we are not working for social justice. Standing with others challenges us to get involved, to act as allies. Working for social justice means, above all, standing together to uproot the tree of violence and to nurture and sustain the tree of life.

A person might be against bullying. They might stand for respect for all. But what does it mean for that person to stand with the bullied? First of all, we must be clear that standing with the bullied does not mean standing against, beating up, or otherwise punishing the bully. Bullying occurs in a school or other environment in which it is supported and allowed to occur. Eliminating one or two bullies will not eliminate the act of bullying, and, more importantly, it will not equip young people to take care of each other and to create an environment where no one feels the need to bully. Someone who stands with the bullied looks for the roots of the problem —the systematic ways that violence and inequality is maintained.

Of course, an immediate intervention might be needed to stop the abuse. But an ally will not just intervene; they will work with others to address the ways that the institutional environment, the adults in the community, and the young people themselves contribute to the perpetuation of abusive behavior and the maintenance of oppressive social systems.

Young people are neither victims nor perpetrators, participants nor bystanders. Often various forms of violence-prevention work are framed as processes of either eliminating the perpetrators or protecting the victims. But young people play complex and ever-shifting roles: They form living communities in schools, after-school programs, residential programs, and neighborhoods. In fact, it is often when they become locked into specific roles that they are most unable to work together as allies. Facilitating social justice means acknowledging and valuing the community that a group of young people create and helping strengthen and expand that community so its members can act as allies to each other and to others outside their immediate circles.

The articles and exercises contained in the new version of Helping Teens serves as a framework for working with youth. They provide the tools and understanding to help us step up as powerful allies to young people. The book is also designed to serve as a guide and preparation for using our curricula Making the Peace and Making Allies, Making Friends. The book can serve to train youth workers, parents, and teachers as well as youth themselves. It can also enhance a Days of Respect program or group work using our Young Men’s Work and Young Women’s Lives curricula.

A tool is only effective when it is used. We encourage you to take our work, built on the work of so many others, and adapt it, add to it, drop the parts that don’t work, and share it with others, particularly with young people. Some of the young people you are working with have already stepped out into the community to make a difference. For others, this may be the first time they have been offered an invitation to step up as allies. You are inviting them to join the growing efforts of people, young people and adults together, to transform our families, our relationships, our communities, and our societies. These multi-generational struggles are happening in the villages in Chiapas and Oaxaca, the streets of Venezuela, the towns in Kerala, the shop floors in South Korea, and the villages in the Niger Delta. Your opportunity is to provide young people with the inspiration, understanding, tools, and practices that will enable them to take active roles in the global struggle for collective liberation. We wish you much learning, connection, joy, and success in your efforts.